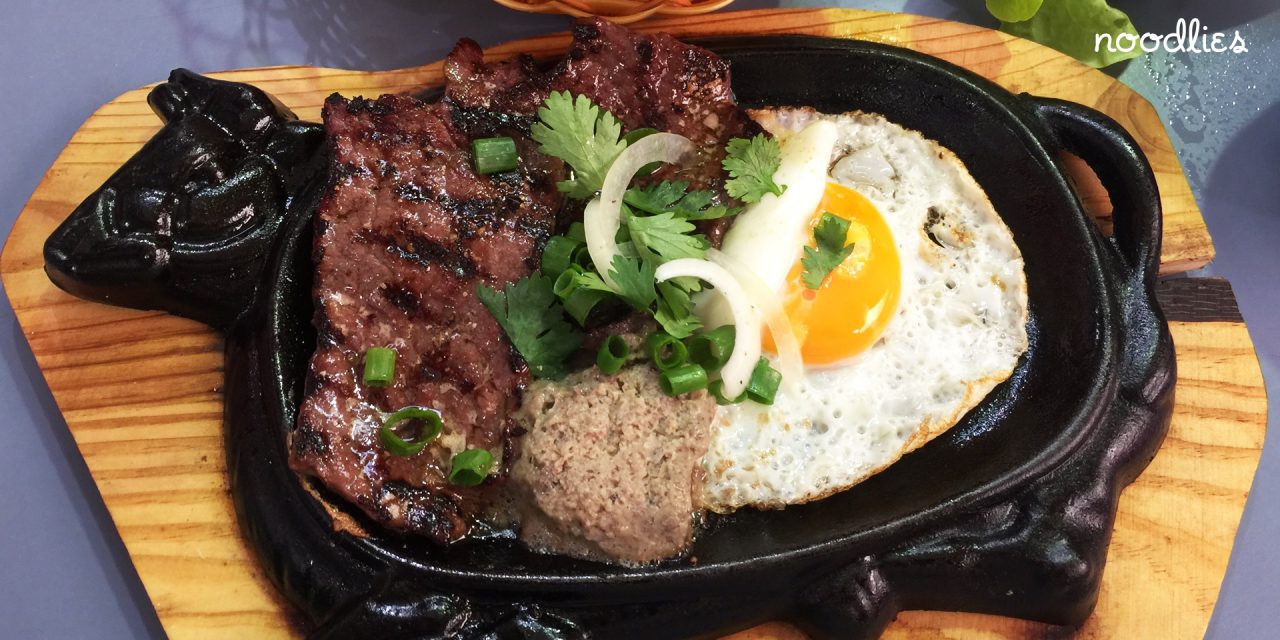 Been to Cabramatta a few times? Want to go beyond the usual pho and pork roll places? 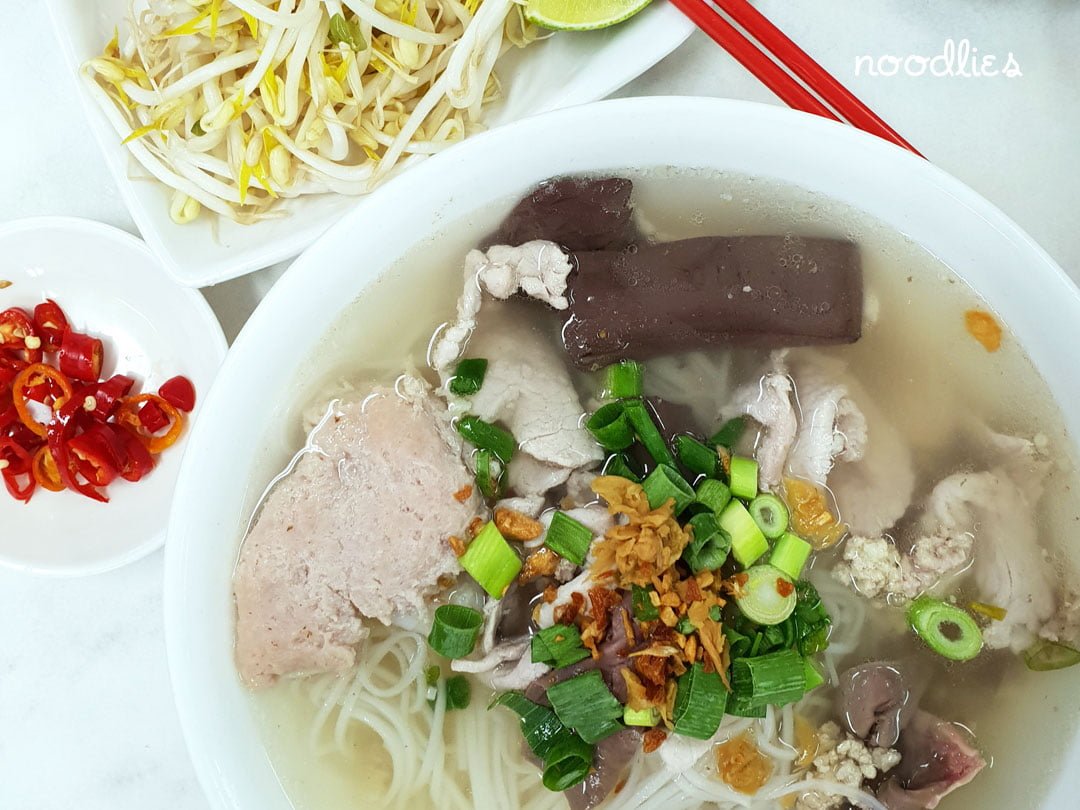 The broth binds everything; rich from pork bones, strained so that it’s clear. Shallots, fried garlic and onion takes the flavour and aroma to another level. It’s a filling bowl, with a variety of meat, mostly pork, congealed blood, liver, mince and prawns. Most have the soup version (above), but you can also try it ‘dry’, the clear broth comes in a side bowl. 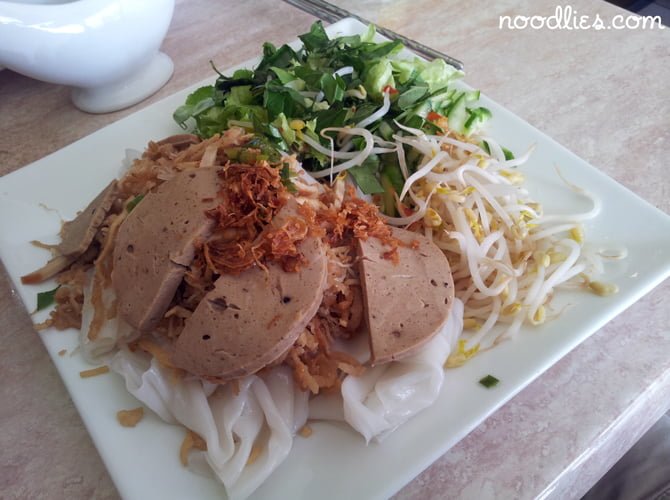 An Lac is the oldest vegetarian restaurant in Cabramatta, going strong for well over two decades. It began as a business venture of Phuoc Hue temple to make vegetarian food accessible for local Vietnamese, at the same time, raising funds for the temple. Nuns used to supervise and most workers were Buddhist lay people. Back then it was a humble, honest and unpretentious eatery conveniently located on the main street.

On the subject of oldest restaurants, An Lac is the oldest vegetarian in Cabramatta, going strong for well over two decades. It began as a business venture of Phuoc Hue temple to make vegetarian food accessible for local Vietnamese, at the same time, raising funds for the temple. Nuns used to supervise and most workers were Buddhist lay people. Back then it was a humble, honest and unpretentious eatery conveniently located on the main street.

Phuoc Hue has since sold and these days An Lac is a little more glamorous. The new An Lac has had a make-over, lime green and yolk coloured walls, fancy light fixtures, heck, even metal chopticks. At the front is a bain-marie showcasing around twenty mouth-watering vegetarian versions of popular Vietnamese standards; bitter melon soup, curries, braised pork and more. 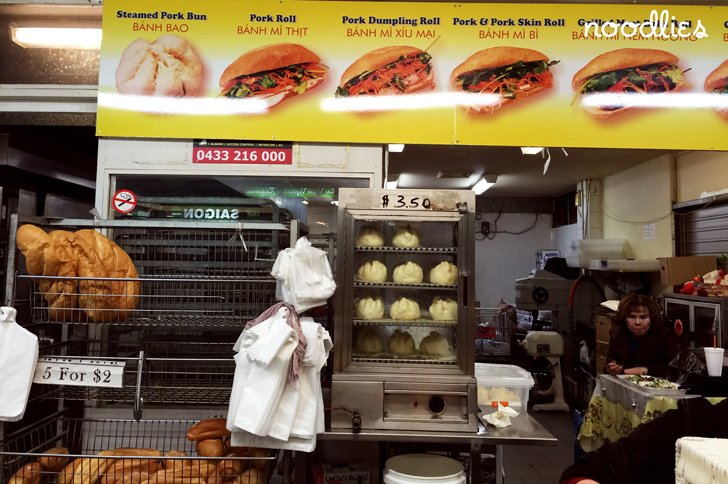 Australia’s first 24-hour pork roll joint (the police have restricted their operating hours since) also serves up fluffy white Vietnamese steamed buns – banh bao. These Unlike the Chinese baos, the Viets throw everything bar the kitchen sink into the filling; pork mince, sliced Chinese sausage, mushroom, vermicelli, a quail egg or two and, if you’re wondering what that crunchy taste is, that would be finely sliced water chestnuts. 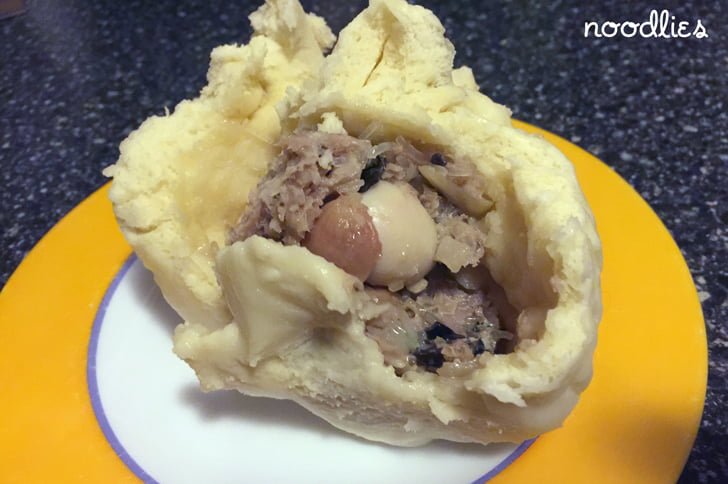 Dinner sorted on the streets of #cabramatta. All savoury $5, sweets $4.50. Which ones would you choose? #streetfood

They used to run Ngoc Duc, but are now in a little hole in the wall at the station end of John Street.

Just about every quick fix, Viet sweet and savoury dish you could think of, including ban beo, goi cuon, bi cuon, banana cake and more. The colour and aroma are dizzying and delicious. 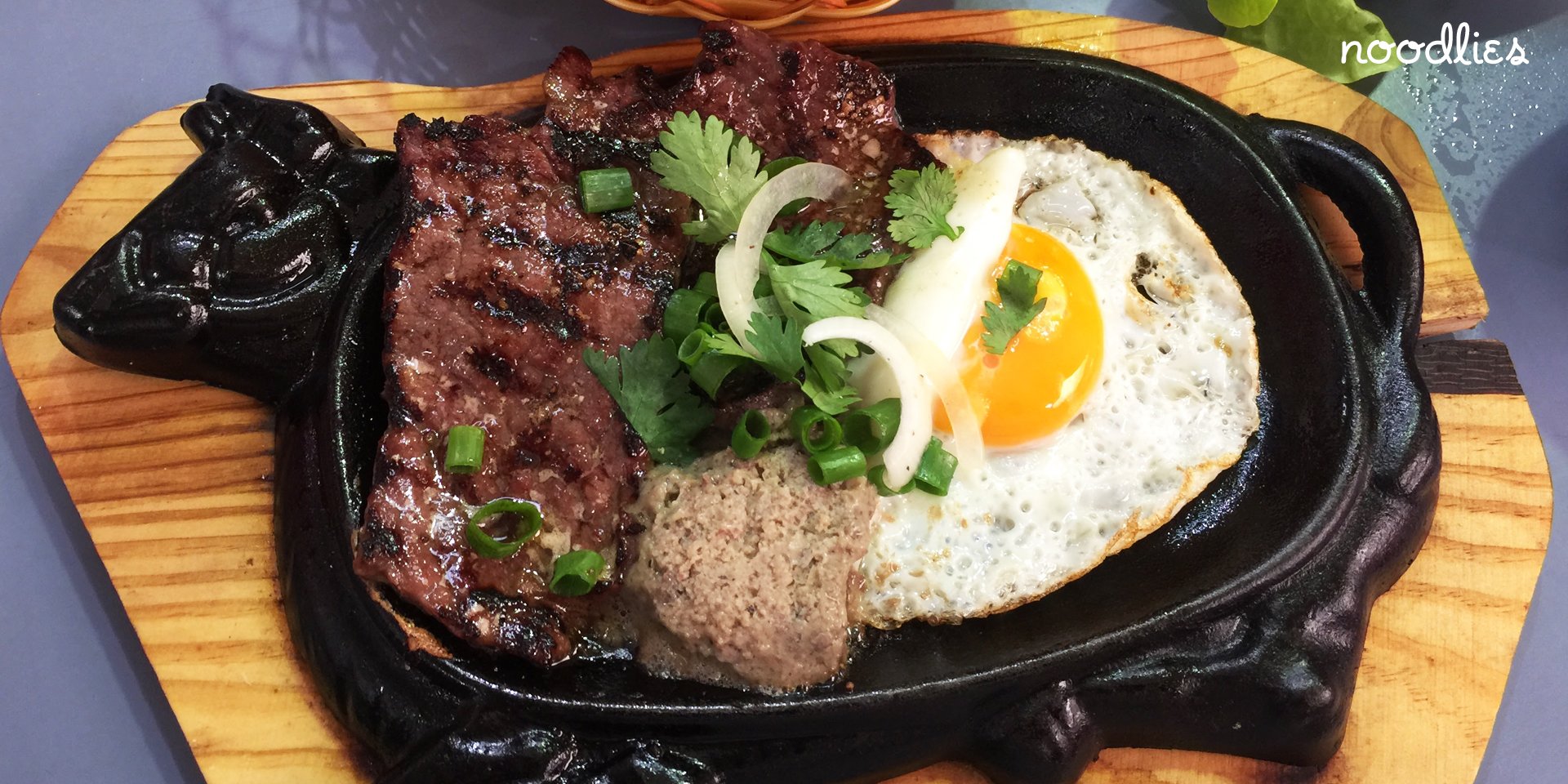 Bo ne is their specialty. The most crucial ingredient is oil, there’s plenty of that to glisten everything up. The supporting acts are beef steak, sunny side up egg and a thick dollop of pate. You have it with a side Vietnamese hot bread.

The steak marinade is sweet, with Maggi being very evident. It’s a nastily (or heavenly) unhealthy meal, the pate slides too easily down the willing throat and the oil is so tasty you’ll want to scrape your bread over every bit of the cow-shaped cast iron plate.

Bun bo hue is a fearsome, authentic and uncompromising Vietnamese soup. It demands more and it gives more. You’re whacked in the face with chili and lemongrass, congealed blood and a pig trotter or two. Make sure you add the generous mint and sprouts from the side dish. 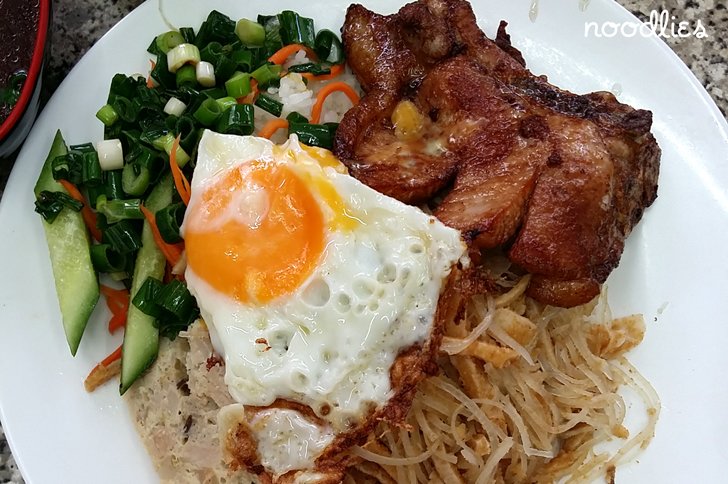 Sadly, most restaurants in Sydney don’t bother with the broken grains and use long grain rice. It’s not the same; smaller grains engage less with the taste buds, helping you to appreciate the other ingredients. For Vietnamese who eat rice daily, and are only too familiar with long grain rice, it’s a completely different texture, which again, help to jolt the senses. Ten out of ten for their punchy fish sauce which combines everything brilliantly. 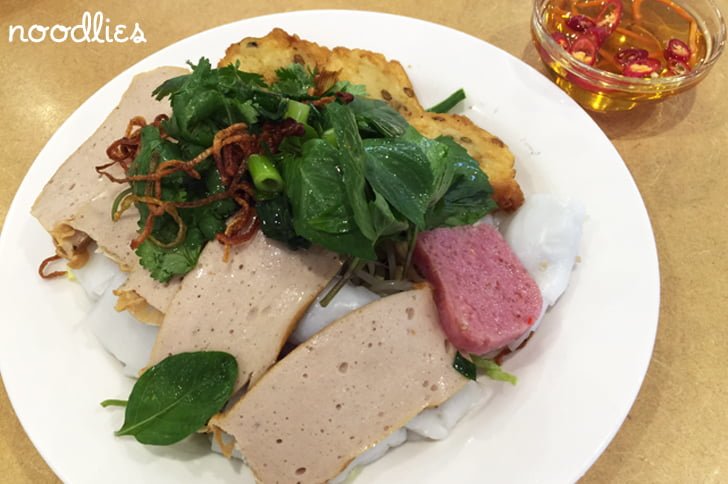 At the top of John street, away from the station, Phu Quoc attracts loyal fans day and night. Expect to queue at dinner time. They serve up home style dishes for when you’re missing Mum’s cooking.

Banh cuon is especially good here. It’s a Vietnamese street food classic that’s hard to find in Sydney. The delicate rice rolls are hard and time consuming enough to make without having to worry about making the mince pork filling. In Vietnam the rice rolls are steamed flat on a large flat surface and lifted with a long chopstick, then covered in filling before being rolled into long flat fingers.

The rice rolls are so thin it’s translucent, giving you a preview of the mince and mushroom deliciousness waiting inside. Banh cuon, which means rolled cakes, are served with cha lua (pork devon), red nem chua (spicy fermented pork) and lots of bean sprouts and Vietnamese mints. Sometimes it also comes with banh cong (fried mung bean prawn cake). It all very colourful and it all gets drenched in chilli fish sauce. 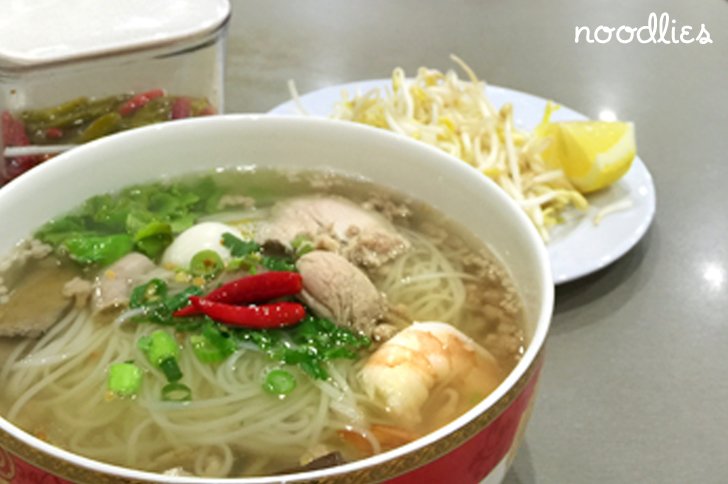 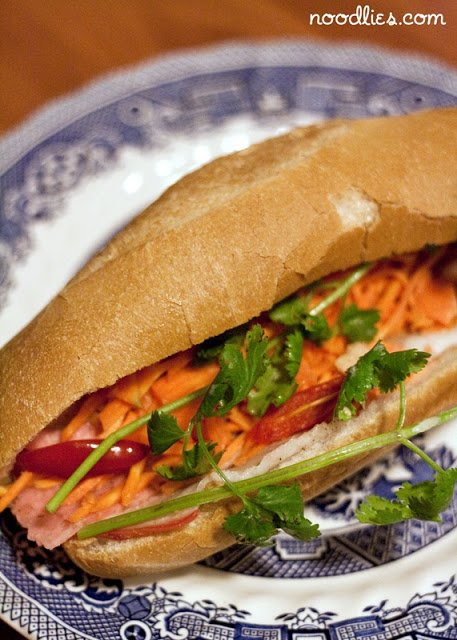 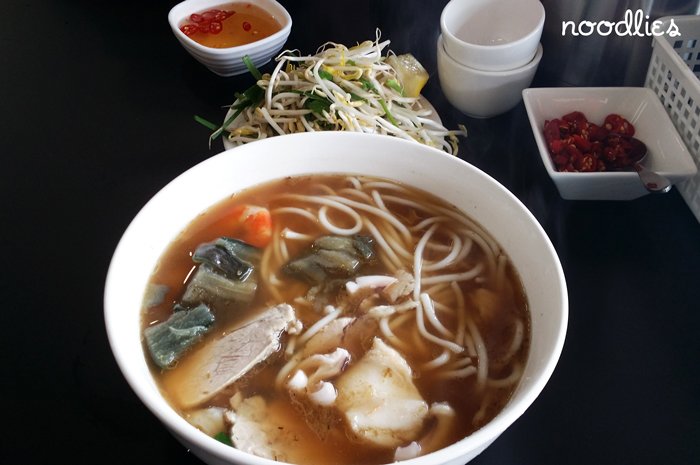