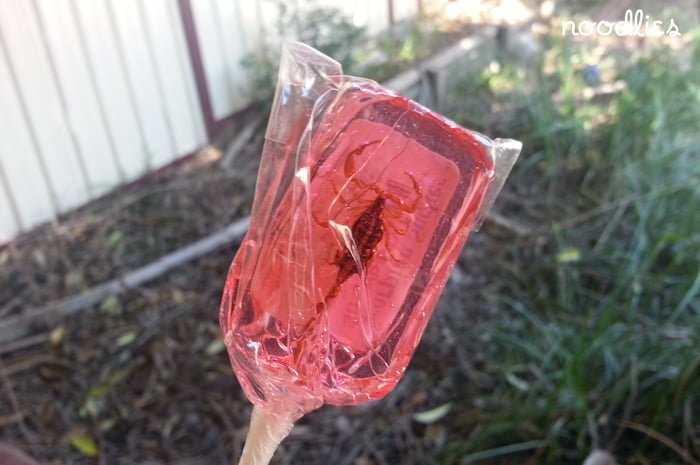 Oh, noooees, lot’s of apple pie but we ain’t got no ice cream, no sweet, delicious Streets vanilla ice cream. So here we are, at the supermarket counter, clutching the blue plastic ice cream container.

Like a child, my eyes wander downwards, attracted by bright colour bling; candy red, yellow, blue and green. And them BOOM! I spy the red brown body and that distinctive scorpion shape. The merchandising box screams “Real Scorpion Suckers” and it was on special, just $3.99, that’s 80c off.

The taste is equally surprising, I thought it would be sweet, sickly sweet to help you swallow crunchy scorpion.

My curious hand extends grabbing one. And then, DOUBLE BOOM! I spy the other display… Crickettes – cricket snacks in three popular snack flavours; sour cream & onion, bacon & cheese and salt & vinegar. My head spins, the ice cream container almost slipping out of my hand, my jaw drops close to the check out counter. The check out girl, giggles, I guess she’s seen other customers in shock before.

I can’t speak. Instead I grab one of each without even checking what flavours they were. Later, when I get home I discovered the randomly selected items were:

I’m trembling from excitement and curiosity, but retain enough common sense to wait until a family lunch the next day to get a collective taste test from the clan. Inside each pack, there are around 10 crickets sealed in a plastic bag. They look like they have been lightly fried retaining their colour and shape, the only difference is a light coat of white powder – sour cream and onion in this case. They look to be crunchy, but in the mouth they’re tougher, more like dried shrimps, very slightly salty – I couldn’t make out sour cream or onion. Just a tough, rough, dry texture and slight salty flavour. Not delicious, though not vulgar. But I won’t be rushing back for more. Just in case you doubt its authenticity, the ingredients list makes it very clear: syrup, artificial colouring and Scorpion. My flavour is strawberry but there are also apple (green), banana (yellow) and blueberry (blue). The lollipop is such a contradiction, playful strawberry clear candy framing a potentially deadly scorpion – complete with legs and sting. The taste is equally surprising, I thought it would be sweet, sickly sweet to help you swallow crunchy scorpion.

The first crunch is well, kinda weird; first you realise it’s sweet, but not that sweet, and then you’re hit with a mild insect flavour which overpowers everything. It’s not too strong at first, but after a while, you can’t shake off the crushed insect, cockcroach taste, which seeps down your throat, up your nose and lingers at the back of your mouth.

Mercifully, I couldn’t really discern any crunchy scorpion texture. It was just that pervasive insect taste that just wouldn’t shift.

Here we are, the eight of us passing the lollipop around, each wincing and blinking and licking our lips trying to get rid of the immovable taste.

No. It’s an experience, something you only try once (I still regret not trying spiders in Phnom Penh a couple of years ago).

Would I try it again? Hell, no! 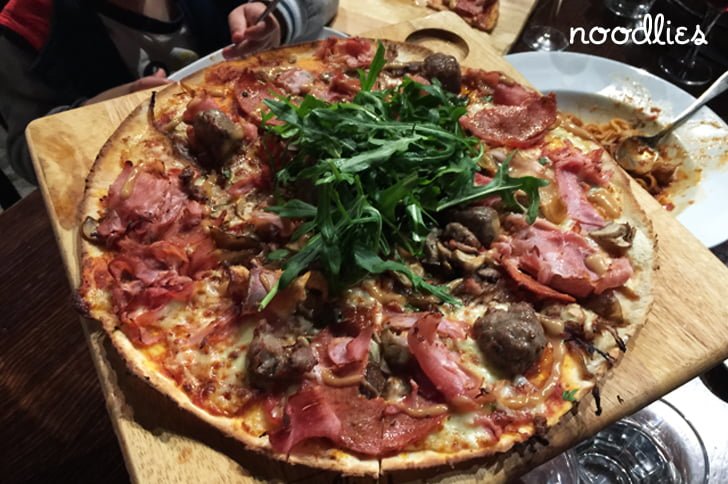