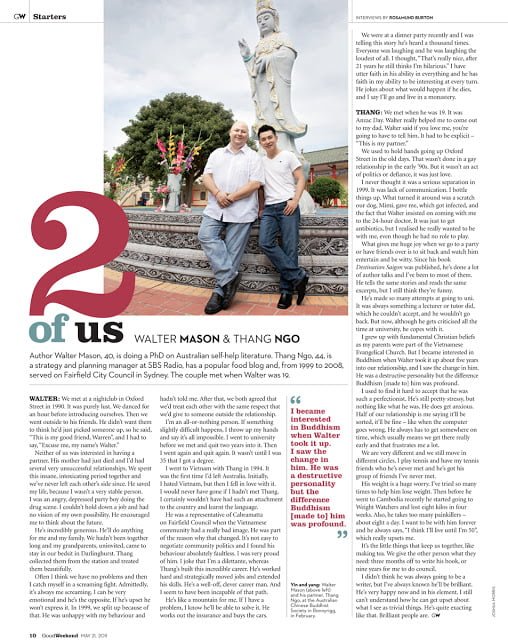 Author Walter Mason, 40, is doing a PhD on Australian self-help literature. Thang Ngo, 44, is a strategy and planning manager at SBS Radio, has a popular food blog [noodlies] and, from 1999 to 2008, served on Fairfield City Council in Sydney. The couple met when Walter was 19. WALTER: We met at a nightclub in Oxford Street in 1990. It was purely lust. We danced for an hour before introducing ourselves. Then we went outside to his friends. He didn’t want them to think he’d just picked someone up, so he said, “This is my good friend, Warren”, and I had to say, “Excuse me, my name’s Walter.” Neither of us was interested in having a partner. His mother had just died and I’d had several very unsuccessful relationships. We spent this insane, intoxicating period together and we’ve never left each other’s side since. He saved my life, because I wasn’t a very stable person. I was an angry, depressed party boy doing the drug scene. I couldn’t hold down a job and had no vision of my own possibility. He encouraged me to think about the future.

He’s incredibly generous. He’ll do anything for me and my family. We hadn’t been together long and my grandparents, uninvited, came to stay in our bedsit in Darlinghurst. Thang collected them from the station and treated them beautifully.

Often I think we have no problems and then I catch myself in a screaming fight. Admittedly, it’s always me screaming. I can be very emotional and he’s the opposite. If he’s upset he won’t express it. In 1999, we split up because of that. He was unhappy with my behaviour and hadn’t told me. After that, we both agreed that we’d treat each other with the same respect that we’d give to someone outside the relationship.

I’m an all-or-nothing person. If something slightly difficult happens, I throw up my hands and say it’s all impossible. I went to university before we met and quit two years into it. Then I went again and quit again. It wasn’t until I was 35 that I got a degree.

I went to Vietnam with Thang in 1994. It was the first time I’d left Australia. Initially, I hated Vietnam, but then I fell in love with it. I would never have gone if I hadn’t met Thang. I certainly wouldn’t have had such an attachment to the country and learnt the language.

He was a representative of Cabramatta on Fairfield Council when the Vietnamese community had a really bad image. He was part of the reason why that changed. It’s not easy to negotiate community politics and I found his behaviour absolutely faultless. I was very proud of him. I joke that I’m a dilettante, whereas Thang’s built this incredible career. He’s worked hard and strategically moved jobs and extended his skills. He’s a well-off, clever career man. And I seem to have been incapable of that path. He’s like a mountain for me. If I have a problem, I know he’ll be able to solve it. He works out the insurance and buys the cars.

We were at a dinner party recently and I was telling this story he’s heard a thousand times. Everyone was laughing and he was laughing the loudest of all. I thought, “That’s really nice, after 21 years he still thinks I’m hilarious.” I have utter faith in his ability in everything and he has faith in my ability to be interesting at every turn. He jokes about what would happen if he dies, and I say I’ll go and live in a monastery.

THANG: We met when he was 19. It was Anzac Day. Walter really helped me to come out to my dad. Walter said if you love me, you’re going to have to tell him. It had to be explicit – “This is my partner.”

We used to hold hands going up Oxford Street in the old days. That wasn’t done in a gay relationship in the early ’90s. But it wasn’t an act of politics or defiance, it was just love.

I never thought it was a serious separation in 1999. It was lack of communication. I bottle things up. What turned it around was a scratch our dog, Mimi, gave me, which got infected, and the fact that Walter insisted on coming with me to the 24-hour doctor. It was just to get antibiotics, but I realised he really wanted to be with me, even though he had no role to play.

What gives me huge joy when we go to a party or have friends over is to sit back and watch him entertain and be witty. Since his book Destination Saigon was published, he’s done a lot of author talks and I’ve been to most of them. He tells the same stories and reads the same excerpts, but I still think they’re funny.

He’s made so many attempts at going to uni. It was always something a lecturer or tutor did, which he couldn’t accept, and he wouldn’t go back. But now, although he gets criticised all the time at university, he copes with it.

I grew up with fundamental Christian beliefs as my parents were part of the Vietnamese Evangelical Church. But I became interested in Buddhism when Walter took it up about five years into our relationship, and I saw the change in him. He was a destructive personality but the difference Buddhism [made to] him was profound.

I used to find it hard to accept that he was such a perfectionist. He’s still pretty stressy, but nothing like what he was. He does get anxious. Half of our relationship is me saying it’ll be sorted, it’ll be fine – like when the computer goes wrong. He always has to get somewhere on time, which usually means we get there really early and that frustrates me a lot.

We are very different and we still move in different circles. I play tennis and have my tennis friends who he’s never met and he’s got his group of friends I’ve never met.

His weight is a huge worry. I’ve tried so many times to help him lose weight. Then before he went to Cambodia recently he started going to Weight Watchers and lost eight kilos in four weeks. Also, he takes too many painkillers – about eight a day. I want to be with him forever and he always says, “I think I’ll live until I’m 50”, which really upsets me.

It’s the little things that keep us together, like making tea. We give the other person what they need: three months off to write his book, or nine years for me to do council.

I didn’t think he was always going to be a writer, but I’ve always known he’ll be brilliant. He’s very happy now and in his element. I still can’t understand how he can get upset about what I see as trivial things. He’s quite exacting like that. Brilliant people are.