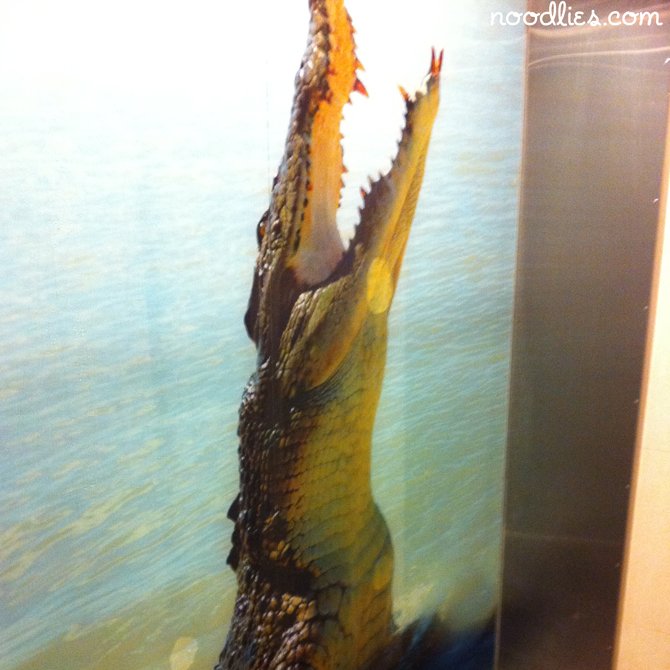 It was a re-union with high school friends that brought me to Penrith and to Outback Jacks Bar & Grill, or OBJ as they like to be known.  I didn’t know much about OBJ, except you go there for the steaks.  It’s in fact a national food chain that’s in almost every capital city as well as being well represented in far north Queensland (I have a soft spot for all things FNQ – that’s where my partner comes from).

While it’s an Australian chain, they claim to have the largest range of steaks in any menu in the world. I counted 23 different types rump, eye-fillet, Angus porterhouse, wagyu and more which can be cooked to five levels, rare through to well done.  To order, you  walk up to the chilled meat cabinet, select the meat like from a butcher and they’ll cook it for you in an open char grill.

The theme is a tribute to Crocodile Dundee, from the crocodile feature hanging off the ceiling of the main restaurant to crocodile decals in the boy’s room (below). Of the 23 steak varieties, it was the Jacks Challenge Steak that blew me away – one whole kilo of grain fed rump steak served with potato wedges and steamed vegetables ($39.95).  Scoff down this massive meal within 30 minutes and get it for half price plus you’ll get a free OBJ t-shirt.

noodlies, Sydney food blog readers can relax, I declined the challenge and settled instead for Jacks Lump A-Rump ($32.95), tantalizingly described as “prime 500g rump, minimum 100 day grain fed – a champion of steaks and the Ringers favourite!”.  The steak was medium rare as ordered (I’ve been having some bad luck lately, the most public was being served rare quail while guest judging Junior MasterChef). This steak was juicy and tender, though my pepper sauce was a tad oily and the mashed potatoes looked and tasted like it was made from a mix. What I couldn’t fault was the affogato dessert.  Espresso and Frangelico liqueur poured over a generous serving of premium vanilla ice cream, what’s not to like?

For those not into steaks, there was an extensive range of seafood, burgers, ribs, “chooks” and pasta dishes on the menu.