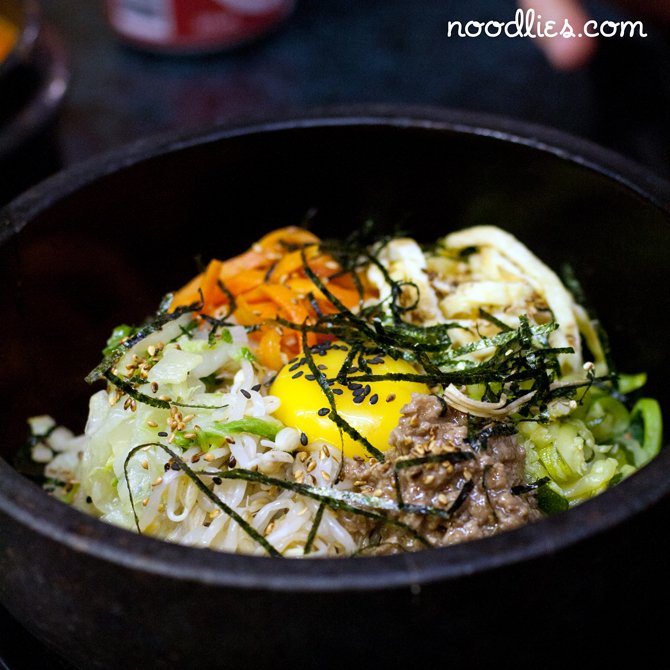 After a hectic first half of 2011, Walter and I needed a break.  Well, I had the break, Walter was up to promote his book, Destination Saigon with an author’s talk at Mary Who? bookshop in Townsville.  I was in Cairns briefly almost 20 years ago on route to Cape Tribulation.  This time we’re staying a few days at the Shangri La Marina Cairns, thanks to Walter :).

Cairns is a tourist town, the population swells with tourists as well as young backpackers and overseas Asian students.  For me, this added a real sparkle to the place, when the place is built around tourism, everyone seems much friendlier and the population younger and fun.  But after a few days of eating ‘modern Australian’ and eggs and bacon for breakfast, I developed a severe hankering for Asian food, especially for overwhelming spicy Korean flavours.

We found the only Korean restaurant in town, Corea Corea.  It was in the appropriately named Orchid Plaza, where most of the tenants were Japanese eateries or businesses catering to Japanese.  Curiously, Japanese tourist numbers have been dramatically falling, in 2008 Qantas reacted by closing it’s pilot base in Cairns and cut flights from the city to Japan.  These days, Asian tourists are more likely to come from China and Korea. Sydney has the most Korean born population in Australia and of course more restaurants.  So while I was craving for Korean, we ordered from Corea Corea with some trepidation.  It’s upstairs in the food court so it’s more like a fast food eatery than a restaurant.  But Corea Corea didn’t disappoint, the food came out quickly and was pretty authentic.

My bi bim bap tasted the part, simple bordering on plain components such as rice, cucumber, bean sprouts and egg, combining well with a flavour lift from the accompanying spicy sauce.  Delicious. The kim chi soup (kim chi chi ke) came out still boiling looking and tasting spicy and terrific.  The soup was thickish and cloudy, very much to my taste.

Even at 8pm on a weekday the place was packed.  The clientelle was pretty mixed, from Asian students, tourists, through to Cairns locals.