There are hundreds if not over a thousand restaurants in Mongkok, so what does it take to set yourself apart? You get yourself two Michelin stars of course!  And it’s no fluke, he’s maintained the two stars over the years.

Ming Court’s clientele are predominantly local Chinese both families and business people, with about 30% being tourists. Interestingly he says the Western tourists are similar to young Chinese in that they are particularly adventurous, which he appreciates.

While he may appear formidable on the Hong Kong Masterchef episode, Tsang is incredibly affable and charming. He has over 30 years cooking experience and nominates seafood and pumpkin as two of his favourite ingredients because they’re so versatile.

Versatile is something which we will see demonstrate amply in the dishes which noodlies will be reviewing. 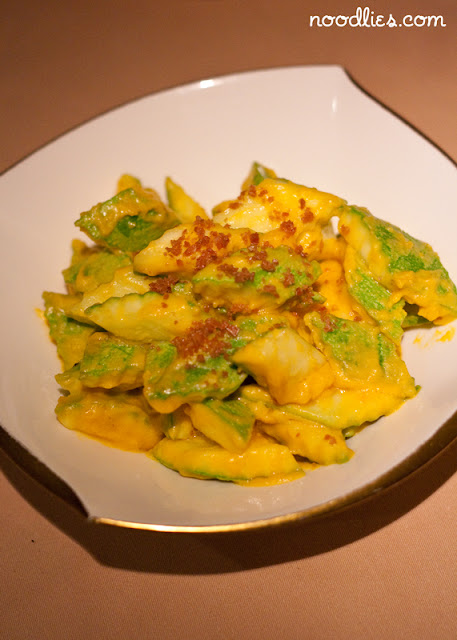 The Yunnan cucumber and salted duck egg yoke combines two ingredients which I love but can rarely get in one combination.  The cucumber is crunchy and the yoke holds flavour but doesn’t dominate, in that Cantonese way!

I really can’t work out my favourite dish from the remaining three.. 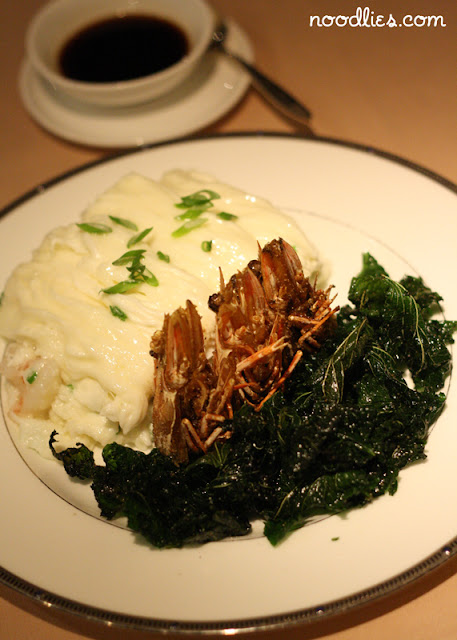 Chef Tsang nominates stir-fried fresh shrimp with egg white as one of his favourite dishes and one which he would order if he came to Ming Court to dine.  It’s so incredibly delicate, the fluffy egg folds in several layers over the freshly fried shrimp and provides texture contrast, heavenly light egg with strong shrimp prawn flavour and texture.  For further effect, the dried green vegetables crumbles in your mouth leaving an ever so delicate salty taste.  You’ll have to watch the video below, it’s the only way I can think of to do this dish justice. 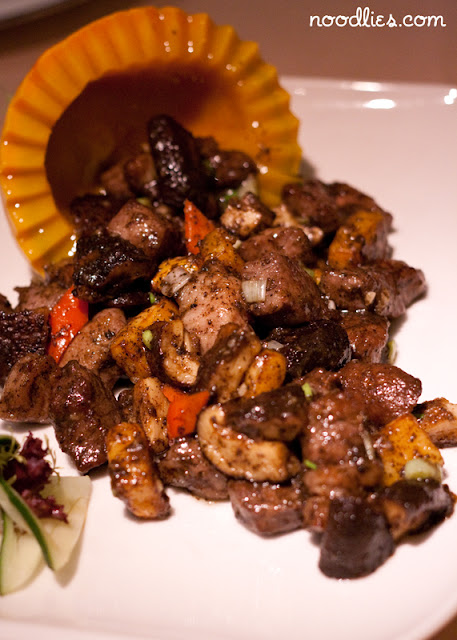 The pumpkin, mushroom and beef are all cubed and stir-fried with a generous amount of black truffle, which fuses them together so that you don’t know which cube you’re eating until you put it in your mouth, a cheeky innovation.  The whole dish is presented wonderfully in a kinda fruit of the loom arrangement.

Or maybe my favourite is the pan fried minced chicken and black truffle stuffed in chicken skin accompanied by sliced pumpkin. 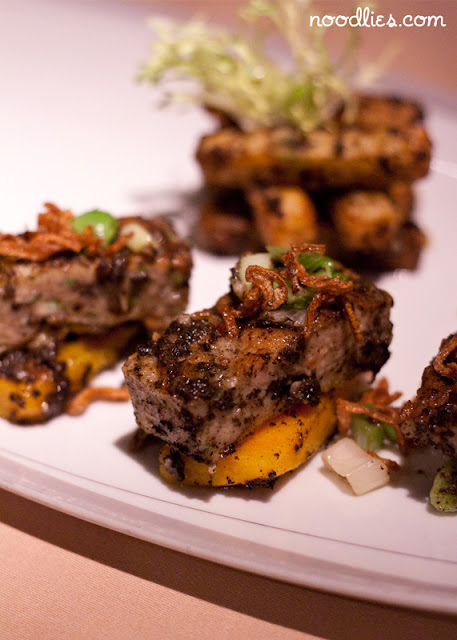 One bite and you get an explosion of taste of chicken and some fish, in a wonderful play on the ingredients the chicken is prepared two ways as well as the pumpkin.  Watch the video and you see what I mean, it’s simply stunning.

The jury is still out for me, it’s so hard to pick my favourite dish, they are all so different, yet delightful in their own way.

Oh and I have to thank my wonderful waitress for suggesting a light but stunning dessert which capped the night perfectly, shark fin crystal extravagance, yes shark fin dessert… watch and be amazed.

I was left speechless by the sheer cleverness, there’s a real sense of spectacle but also humour about this wonderful dish. 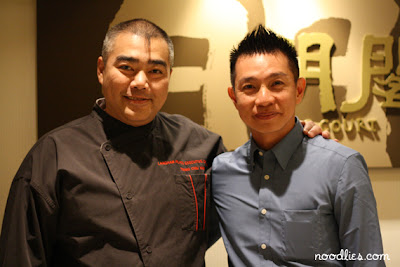 While Chef Tsang is affable and sweet, he still holds a passion to go further and further, next year he’s embarking on new challenges, tackling white truffle as well as wine/main course matching.  He teases me with a new creation he’s cooking up for 2011: melted white chocolate, truffle and wagyu beef… I’m so, so intrigued.

Oh and he’s set his sight on getting that third Michelin star, I promised I’d send him a congratulatory present from Australia if he manages to achieve it in 2011.  Cardith was a witness and with this post, the promise is in writing for all the world to keep me honest.  Good luck Chef Tsang!

noodlies Sydney food blog dined at Ming Court as a guest of Ming Court, with thanks to Chef Tsang and Cardith. 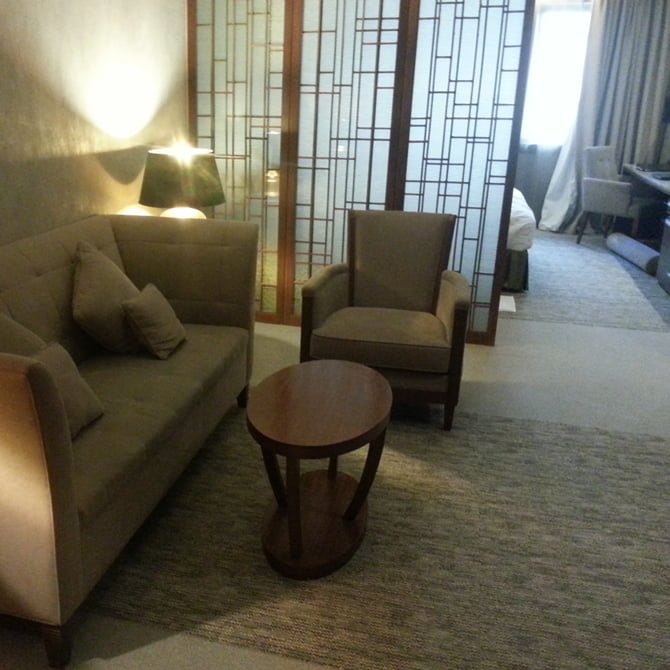 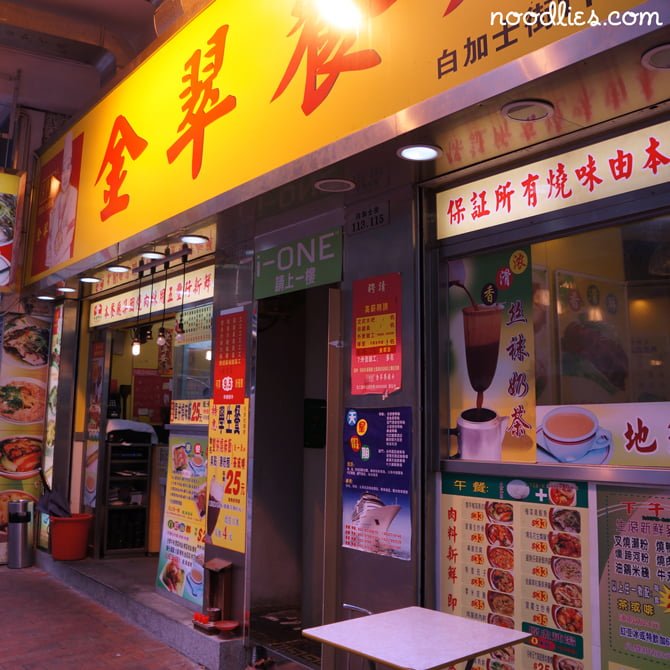 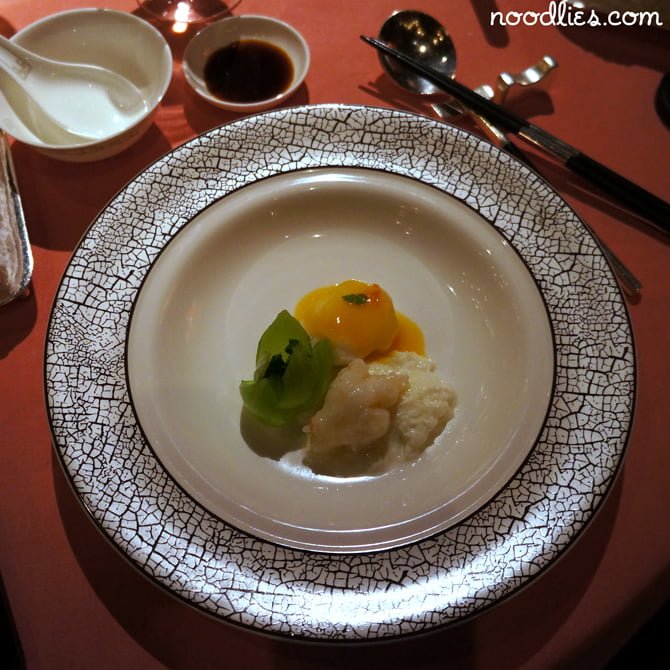