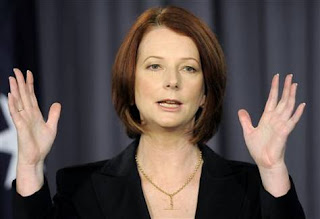 Of course, it’s just my speculation, but I reckon Cafe Sydney could the favourite Sydney restaurant of our first female prime minister, Julia Gillard.

First of all, the food is modern Australian, just like our history making new PM of three weeks; oh,  and special emphasis on Australian; none of that foreign, assylum seeking silliness which rightly belong in East Timor.

Our new PM probably prefers a restaurant in Sydney’s west, like Penrith, where there are red heads but, quite rightly, not rednecks or racists and definitely no political blood (she assures us so).  But, regretably the gruelling schedule of a PM in election mode means she needs to eat within dog whistle of an airport.

Meat for entre, seafood and greens for mains makes a nice harmonious marriage, none of that other silly gay marriage thing – that’s too modern for Australia!

PS. when in Canberra, Julia probably prefers to dine with Don Farrell at that discrete Canberra restaurant, Hong Hau Vietnamese, apparently a favourite with factional bosses when plotting political assassinations.

Julia Gillard, PM is the leader of the Australian Labor Party.  Today, she announced the date of the 2010 Australian elections. When is the federal election? Saturday, August 21st, 2010.

What do I think is the federal opposition leader, Tony Abbott’s favourite restaurant in Sydney?

What do I think is Australian Greens leader, Bob Brown’s favourite restaurant in Sydney?