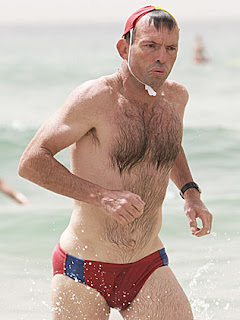 Doyles restaurant is the perfect dining destination for Tony Abbott, leader of the Liberal party and federal opposition.

The beach location is perfect for a morning budgie smuggling swim – could be a very literal pitch for the female vote, an area whe could improve on.

The pugilistic and so far, oddly effective opposition leader would probalby order a mixed plate of Jumbo prawn, scallop mornay, smoked salmon and king prawn for entre – after all, he has to feed both the gospel Tony and the phoney Tony.

Mains has to be South Coast Yellowfin Tuna Steak, filling, nutricious and manly steak combined with the health giving properties of fish… what could be better for Australia’s own political triathlete?

Oh and of course, it has to be Doyles because he’s got to support Lib supporters, given Peter Doyle is running for Liberal preselection for the federal seat of Vaucluse.

The 2010 Australian elections was announced today by prime minister Julia Gillard (who has her own likely favourite restaurant in Sydney too). When is the federal election? Saturday, August 21st, 2010.

What do I think is Australian Greens leader, Bob Brown’s favourite restaurant in Sydney?