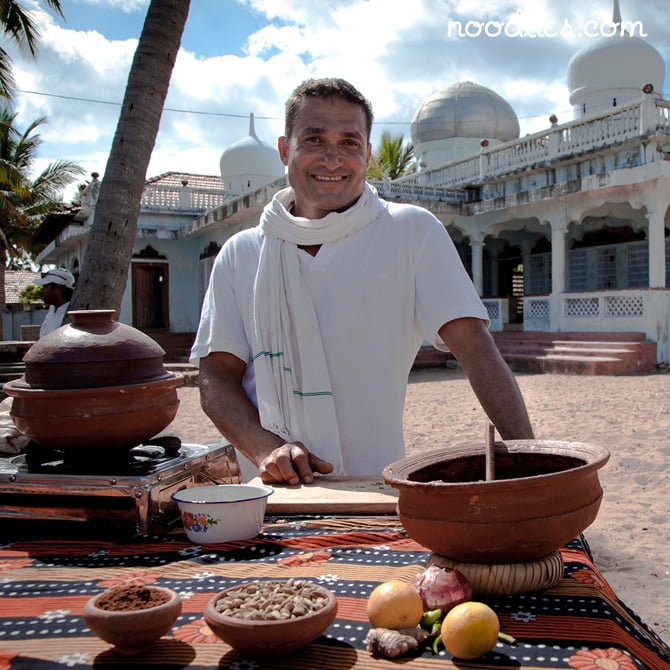 Flushed with successful food programs like Food Safari, Luke Nguyen’s Vietnam, Iron Chef and Gourmet Farmer, SBS is about to launch another one.  The new show tells the story of Sydney Chef, Peter Kuruvita of Flying Fish.

My Sri Lanka with Peter Kuruvita is strikingly similar in format to Luke Nguyen’s Vietnam, another Sydney Chef – we get three dishes featuring exotic, colourful ingredients cooked against a spectacular backdrop. Born in London, Peter Kuruvita spent time as a child in Sri Lanka where he was introduced to the delights of cooking by watching his grandmother prepare ancient Sri Lankan dishes in her simple kitchen.  After moving to Sydney, he worked alongside Greg Doyle at Rogues.  Doyle introduced him to the finer side of cooking.  Kuruvita followed this with a stint at the one Michelin star Rue St Jacques in London.

You get a sense this series will be action packed.  In the first episode, not only do we get to know Kuruvita, we also visit Colombo’s largest traditional market, join in the largest celebration at a local temple and watch him track down his old nanny.  And the dishes are, well, dishy – for example grilled banana prawns in a delicious sauce containing garlic, ginger, light & dark soy, fish sauce, oyster sauce, fish sauce and a very, very generous amount of butter. For me, at least in the first ep, the most endearing thing about this show is how personal this journey is for Kuruvita, the warm embrace of the old nanny is followed with them cooking breadfruit curry at the markets. It’s real and it’s raw and I like it.

Sri Lanka is probably less of a tourist destination than Australia’s current favourite, Vietnam so you’re likely to find much in this show that is exotic, enchanting and ultimately enthralling.