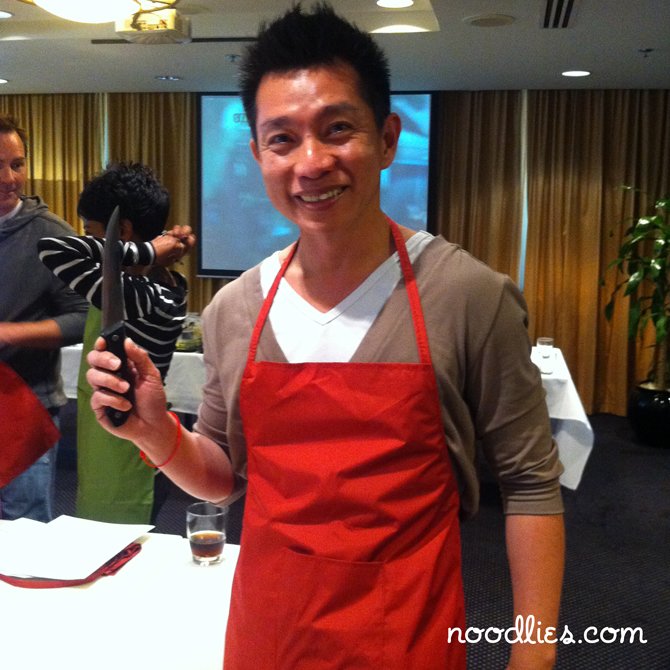 How do countries attract tourists and promote their culture? Australia uses the Opera House and our beaches, South Korea is about K-pop, Thailand is the land of smiles, Hong Kong is the shopping and the weirdly mesmerising evening harbour light shows. Malaysia is heading down the path of food.  After all, who doesn’t eat and enjoy food?  Malaysia Kitchen is the umbrella name for a whole host of events around the world, which features pop up Malaysian food experiences that are brought to the world, London, New York, Sydney etc.  This year, the Malaysia Kitchen BBQ Madness event was held in Parramatta to really take Malaysian food and culture out to Sydney’s west. noodlies, Sydney food blog was offered the opportunity to go on a Flavours of Malaysia cooking class held at the Grace Hotel with the effervescent Wanitha Tanasingam, Malaysia Kitchen ambassador.  Of course, frequent readers of noodlies know, I have no interest in cooking at all, but having met Wanitha at the Parramatta event (actually she almost suffocated me with her generous hug – see above), I was intrigued by this wonderful, larger-than-life character. Wanitha is a natural entertainer and self-confessed “goddess of love”, especially when it comes to delightful world of double entendres, one of the many reasons I’m so in love with her.  During the session on how to use a knife in the kitchen, Wanitha throws in “they say size doesn’t matter, but I say the size of the tool does matter” and hoots in such an infectious way, that I couldn’t help but burst out in laughter too.

Call it the new ager in me, I sense beneath the laughter is a strong, focussed woman of considerable drive.  And she spreads it around, telling everyone they can cook and we just need to put our minds to it.. despite my strong aversion to the kitchen, Wanitha almost had me screaming out “yes, I can!”.

She showed us how to cook five Malaysian dishes and we were then split up into two teams to cook them and share the food for lunch. The dishes were varied, from satay, salad to curry: I’ve never had rojak before, but this crisp, tart salad is now a firm favourite; pineapple, green mango, green apple, yam bean provide the crisp tartness while the chillies, palm sugar and salt bind everything together.  I can easily imagine sitting down to a bowl on a warm Malaysian evening.  Easily my favourite dish of the day. The iphone photo does not do justice to the kari ayam (chicken curry) cooked in a huge clay pot.  The fragrance of chicken pieces slowly cooked in  garlic, star anise, curry leaves, pandan leaves and ginger inside the clay pot wafting over the room, making everyone salivate and hungry. How could you not love the gorgeous chicken satay pieces above.  We got to skewer them in between cucumber pieces and dip into thick peanut sauce made from scratch. We learnt how to do a mean char kway teow: rice noodles with a mix of fresh ingredients.  Char means burnt which explains that taste which makes this dish so delicious.  We learnt quite a few tips for cooking with woks.

I saw Wanitha’s demonstration of how to cook all the dishes but had to go before we got to cook them ourselves, but I did learn:

If you’re interested in doing one of Wanitha’s fun Malaysian cooking classes check out her website, I’d recommend it!

Finally, here’s Wanitha Tanasingam whipping up the crowd during her cooking demonstration.  The delightful Wanitha playful introduces herself as the ‘love goddess’ and displays a certain fondness for double meanings “the size of the tool counts..” and “take a firm grip”, were two that come to mind.  I love it!  Watch an excerpt of her cooking demonstration below with Wanitha and  Cr Lorraine Wearne, Mayor of Parramatta and Sara from Belly Rumbles food blog.