Shanghai is a big place, and if you are travelling by yourself it can, quite frankly, become a little daunting. All alone there recently, I felt drawn to the groovy and very intimate Tianzifang precinct. This is a gorgeous collection of little connected alleyways filled with groovy shops and any number of intimate (in the extreme!) restaurants, bars and cafes. Tianzifang is, as my local friend says, “old-style Shanghai,” and I feel completely at home there.

There is a fabulous shop in one of the alleys selling Tibetan beads, jewellery and religious implements, all at outlandish prices, but presided over by the most magnetic (and gorgeous) shopkeeper, whose handsome, muscular form beams out at you from photographs placed throughout the shop of him and in the embrace of various Tibetan Buddhist masters. In Tianzifang there is also an outlet for Demeter perfumes, surely the kookiest parfumier in the world, with its fragrances recreating almost to perfection such distinctive smells as ‘Snow’, ‘Rain’ and – my favourite – ‘Earthworm’. 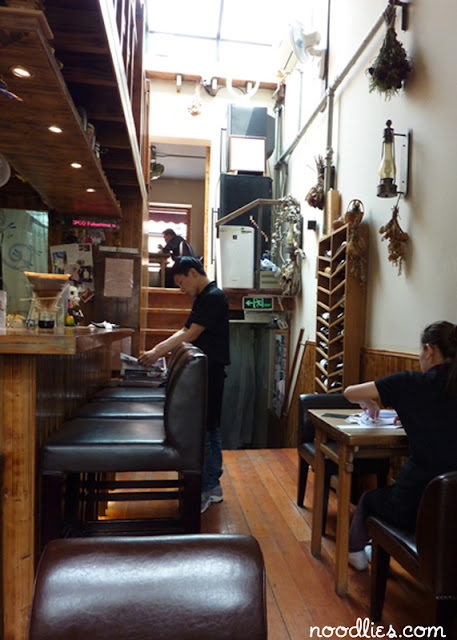 I discovered the terrifically homey Cafe Dan because I was aching for something a little sweet, and they had a large picture of a slice of cheesecake displayed on their menu board. It was as though they knew I was coming. When I opened the door I was confronted with an empty vestibule and a steep and incredibly narrow stairway. Making my way up (were they even open? I wondered) I was greeted at the top by some young and beautiful staff, and I squeezed my way to one of the tiny tables. Like all the restaurants in Tianzifang, Cafe Dan is a TINY place which probably seats no more than 20 people.

A young and very glamorous woman was at the table next to me, and somewhat disconcertingly she photographed me at every stage of my snack. I ordered the longed-for cheesecake, and I couldn’t resist the green tea latte. Both were delicious, and suitably expensive. There seems to be a Japanese hand at work at Cafe Dan, as it offers a range of savoury dishes that are Japan-inspired.

It felt instantly like home. Though it was small and about half-full, I was left to enjoy my green-tea latte in leisure while I read a book and took notes. The staff were scrupulously polite, even friendly – a rare enough thing in Shanghai all on its own. The next day I wanted to go back, and I know that if I spent any time in the city Cafe Dan would become one of my special places.

For those interested in ethical eating, Cafe Dan was the only place in Shanghai I saw advertising organic, natural ingredients, and even their menu was littered with ecological messages.

Most of the eateries in Tianzifang can get very crowded at lunchtime, so try to visit slightly off-time – 11, maybe, or 2.30pm. That way you’ll be sure to get a seat.