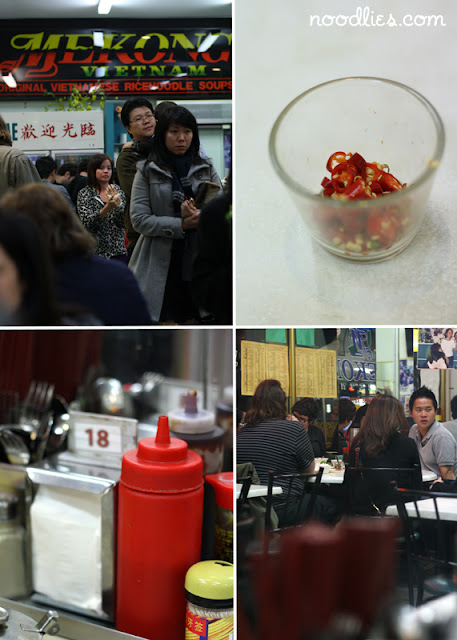 At 10pm on a Thursday night, Pho Mekong Vietnam was still pumping.  The customers were a mix of late night lads and ladettes, plus the Asian clientelle.

I was grumpy because my plane was late and missed my booking at Hutong Dumpling Bar.  Stumbled across this place and since noodlies Sydney’s Best Pho was only announced the day before, I had to give this Melbourne pho a try.. for professional comparison purposes, of course.  The exterior red neons attracted me like moth to a flame.

I’ve tried all sorts of pho, but haven’t had the beef ball version in a long time.  The ones at Mekong Vietnam were exactly what they should be; hard/crunchy in texture (soggy is bad!) and there were plenty of beef balls, so full marks here.  Not such a fan of the soup, which lacked flavour.  The rice noodles too were a little over-cooked so broke up a tad too easily.  And the chilli just wasn’t hot.