When I found Burwood Korea House it was like finding a long, lost relative.  For at least 4 years, we’ve been almost weekly regulars at Ceci in Strathfield, but in June after admittedly a few weeks absence, we felt there was something wrong.

The restaurant was called Ceci, the menu was the same, but everything, including the decor was just that bit different.  We had concluded that Ceci had changed hands depriving us of the fabulous owner.. she’s hard to describe… the closest I can get to is my mother but fastidiously and fabulously attired and made up (read over the top). 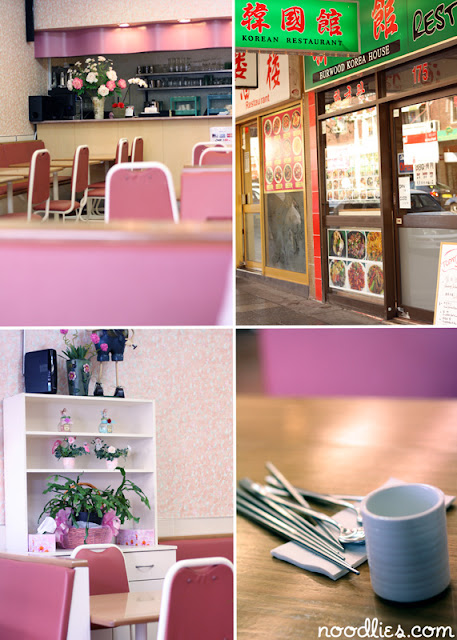 While checking out eatshowandtell Sydney food blog, I found that Minh had discovered her new venture; Burwood Korea House, and just in case you weren’t sure she took one of the old signs with her that still said Ceci… mistake or act of pure brillance, I chose to believe the latter, Mrs Ceci can do no wrong in my eyes!

We just had to celebrate Father’s Day lunch there, today, as I said she’s almost family.  Firstly a word on the decor, while the outside is that distinctive Korean green and mass of busy menu pics, inside was, well… er, pink and more pink, from the seats to trimmings.  And as you can see from the bottom left pic above, it just looks like a little girl’s room, down to pink flowers and tissue boxes.

No mistaking the taste though, strong, confident… while I think the chef might have changed, it’s still faithful to the Ceci of old.

The Korean Beef Soup was bold in taste and colour, the beef tender, shallots guaranteeing you won’t be going out afterwards.

Sweet and sour chicken is sweet and easy on the palate, not too spicy with the pieces of vegetables cut chunkier than other places, which I like, but may not be to everybody’s taste.

(Ex) Mrs Ceci, I’ve missed you and am so happy to have you back (pink and all), please do not leave me again…