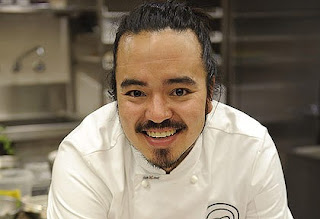 Lawyer Adam Liaw has won the second series of MasterChef, beating 20-year-old student Callum Hann. Both hail from South Australia, shared a bedroom and have, during the competition, become close friends.

‘‘You said today you had spent your life coming second, you are second no more,’’ judge Matt Preston told Liaw.

‘‘What you have, which very few people have is a vision about food. We’re so delighted, so excited that you are the Masterchef for 2010.’’

Liaw described the moment as ‘‘extraordinary’’.

Runner-up Callum Hann did not walk away empty-handed – he was awarded a special culinary scholarship in judge George Calombaris’s Melbourne restaurants, including the prestigious Press Club.

The two-hour final edition is widely anticipated to be one of the biggest TV events of the year, drawing in an estimated audience of around four million viewers and displacing the election debate to an earlier timeslot.

The finale for the first series attracted 3.74 million viewers, but the second series has outpaced the first in its nightly ratings – up between 20 and 30 per cent on some nights.

The show’s executive producer Margaret Bashfield told the Herald no one had anticipated how enormous the second series of MasterChef has become.

“No one could have imagined it,” she said. “We certainly didn’t.”

“We hoped people had become engaged with the first series and would come back for the second series, but from week one and two it became obvious people were looking forward to this show.”

Bashfield said the producers were anticipating a ratings J-curve – where a show launches, then dips before slowly building up against near the finale – but it never came.

“We were delighted, obviously,” she said. “It’s incredibly to think a country can commit to such a long program and over so many nights.”

The 14-week competition has featured a who’s who of the food world, including world-renowned chefs such as Jamie Oliver and Tetsuya Wakuda. It even featured Australia’s head of state, Governor General Quentin Bryce, who hosted a dinner party at which the show’s final three contestants prepared three courses.

Ten will launch another spin-off from the franchise, Junior MasterChef Australia, later this year. It will feature 8-to-12-year-old contestants.

A third series of MasterChef has been confirmed for 2011.