At Home on the Range, Elizabeth Gilbert 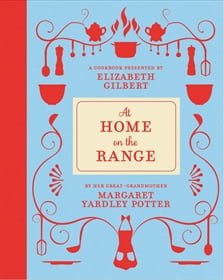 Elizabeth Gilbert‘s heart-wrenching soul searching in the international best seller, Eat, Pray, Love took her to three countries, India, Italy and finally Indonesia (Bali). Of the three, eat was definitely the gorgeous food of Italy and we get a glimpse at Gilbert’s love for food.  The love runs in the family.

At Home on the Range is a recipe book that is so personal it’s almost biographical.  While moving into a new house, Elizabeth Gilbert unpacked some boxes of family books that had been sitting in her mother’s attic for decades. Among the old, dusty hardbacks was a book called At Home on the Range (or, How To Make Friends with Your Stove) by Gilbert’s great-grandmother, Margaret Yardley Potter (nickname Gina). Having only been peripherally aware of the volume, Gilbert dug in with some curiosity and soon found that she had stumbled upon a book far ahead of its time.

“Of course, I’d seen the book on family bookshelves, and had certainly heard the name Gima mentioned with love and longing, but I’d never actually opened the volume.  I’m not sure why. Maybe I was busy.  Maybe I was prejudiced, didn’t expect much from the writing… Or maybe I am just a fool, willing to travel the world in pursuit of magic and exoticism while ignoring more intimate marvels right here at home” Elizabeth Gilbert’s foreword.

The book was ahead of its time. In her workaday cookbook, Potter espoused the importance of farmer’s markets and ethnic food (Italian, Jewish, and German), derided preservatives and culinary shortcuts, and generally celebrated a devotion to seeking out new epicurean adventures. Potter takes car trips out to Pennsylvania Dutch country to eat pickled pork products, and during World War II she cajoles local poultry farmers into saving buckets of coxcombs for her so she can try to cook them in the French manner. She takes trips to the eastern shore of Maryland, where she learns to catch and prepare eels so delicious, she says, they must be ‘devoured in a silence almost devout’. Part scholar-she includes a great recipe from 1848 for boiled sheep head-and part crusader for a more open food conversation than currently existed, it’s not hard to see from where Elizabeth Gilbert inherited both her love of food and her warm, infectious prose.

With the foreword from Elizabeth Gilbert, Margaret’s great-granddaughter, this unearthed treasure is both a beautifully written, useful cookbook and an insight into a lifestyle previously forgotten.

At Home on the Range contains over 200 recipes from fruit cake, clam chowder through to nut bread and creme brulee.  It’s written in a diary style which is both engaging and entertaining.

All of the proceeds from the book go to ScholarMatch, a non-profit organisation that increases college access for low income students.

About the author: Elizabeth Gilbert is the author of three books of non-fiction, the multi-million-copy-selling Eat, Pray, Love (now a major motion picture) and its follow-up, Committed, as well as The Last American Man (nominated for the National Book Award and a New York Times Notable Book for 2002). Elizabeth Gilbert lives in Frenchtown, New Jersey.

At Home on the Range by Margaret Yardley Potter and presented by Elizabeth Gilbert is published by Bloomsbury and distributed in Australia by Allen & Unwin.