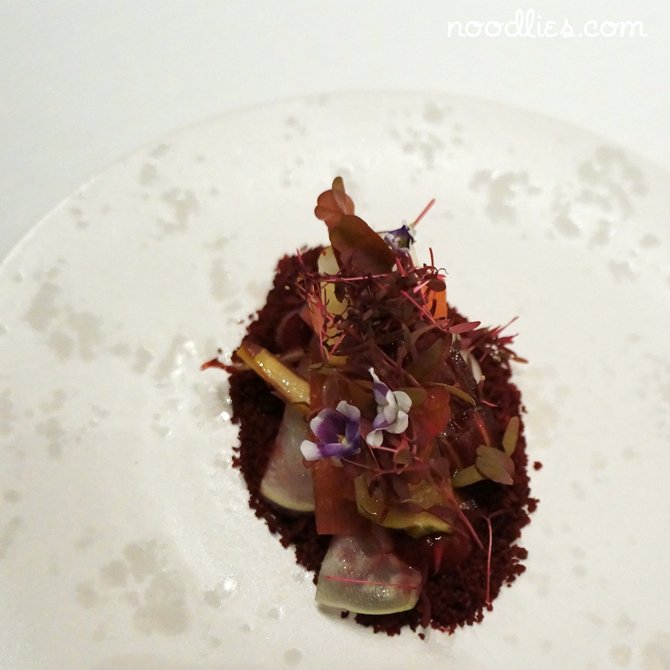 Frequent readers of noodlies know that I don’t/can’t cook, but that doesn’t mean I’m not interested in seeing one of Australia’s top chefs showing his mastery in an intimate setting, especially when that setting is the stunning Quay Restaurant.

A dozen or so food writers and bloggers gasped and sighed as Peter Gilmore, Quay’s Executive Chef and one of Australia’s most awarded, showed us how to make two amazing dishes:

See him in intimate and very lovable mode in the noodlies video below talking Gouda and pig belly! And read until the end of the post to see Gilmore in a video demonstration of how to make savoury gouda custard. If you’re inspired to have a go at these two stunning Peter Gilmore dishes, (pork belly pic above) download the recipe here.  I’d love to know how you go!

After the masterclass, we were treated to a diverse five course degustation that included: beef, seafood, partridge, salad and my personal favourite, dessert with mangosteen.  Each course was served with matching wine. This is a salad will challenge your perception of a salad; visually it’s a deep crimson that’s more reminiscent of red meat with crunchiness delivered by thin crisp radish and carrot pieces. We’re reminded of its earthy nature by the crimson crushed pomegranate molasses foundation that had an eerily similar texture to dirt.  It’s of one of the most visually stunning, delicate salad presentations I’ve seen and by far the most complex in taste and texture. This seafood dish looked like pristine white fish flesh washed on shore by foaming, bubbling golden tapioca.  Gilmore managed to extract maximum flavour from the ingredients which hit the palate in swift succession and with deep intensity. This dish left me almost breathless. I’m afraid my senses were still knocked about by the previous two stunning courses so I found it hard to engage with the partridge, sure it was brilliantly presented on that classic Quay plate, but I struggled to find the highs in this course. The beef was a favourite of mine when we last dined at Quay a few months ago.  As I said in then: it’s a dish with stunning contrasting tastes and texture; tender beef with bread crumb outer.  The marble score 7 Wagyu black angus was poached in an oxtail and morel stock reduction delivering an amazingly tender experience.  It’s then encrusted in roasted farro, buckwheat, hazelnut and Ezekiel bread crumbs; Ezekiel bread comes from an old testament recipe based on 6 different sprouted grains, wheat, spelt, lentils,millet, soy and barley. Further contrast came from the puree base made from morel and black pudding.  Stunning. This dessert reminded me of how ‘Sydney’ Quay’s menu was: western with strong Asian influence.  I felt that in February and said as much in an earlier post.  This dessert is a perfect example: growing up in Vietnam mangosteen and custard apples were the fruit of my childhood.  Here, they provided the exotic bursts of flavour in a dessert that, in typical Gilmore style yield many different tastes and textures.  Delicious and cheeky.

Noodlies cooking like Peter Gilmore? Frankly, never. But I did love seeing Gilmore in his element; confident, engaging and very approachable.  And I loved the delightful degustation.

Peter Gilmore, along with Tetsuya Wakuda and Alex Perry are Electrolux brand ambassadors.

See Peter Gilmore in a video demonstration of how to make savoury gouda custard, with thanks to Electrolux.

About Peter Gilmore
Peter has been the Executive Chef at Quay Restaurant for almost 10 years. Over this time his creative cooking style has seen the restaurant receive nine consecutive 3 Chefs Hat awards and be awarded Restaurant of the Year four times. In addition, Quay is currently ranked Number 29 on the coveted S.Pellegrino World’s 50 Best Restaurant’s list (2012), the highest ranked Australian restaurant on the list.

This unique noodlies experience was courtesy of Electrolux and Open Haus.  And it was good to see fellow bloggers Simon and Tina again too 🙂