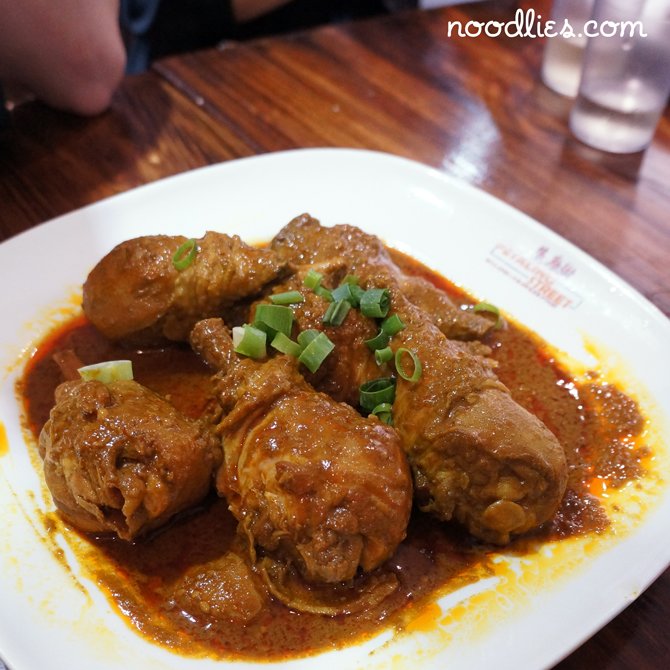 No, this isn’t the Petaling Street in Malaysia, but a new-ish restaurant from the successful Petaling Street Malaysian Hawker Food chain from Melbourne.  It all started as a casual tweet discussion about the mixed reviews for this place between Lauren, Mel and noodlies, Sydney food blog, which quickly turned into a bloggers’ evening with Lauren, Angie, John, Kat and I.

Petaling Street is on George Street towards the broadway end of Chinatown.  It’s a narrow frontage, made squeezier by the open kitchen, but there’s a suprisingly large amount space downstairs (see the featured video).  True to hawker style, this place is for fast food and not comfort, stool seats maximise space and intensifies my back pain.

Uncharacteristically for me, I let everyone order, I’m just happy to meet Angie and Kat again, and Lauren and John for the first time.  Tonight, noodlies is going with the flow.  In true democratic style, we all order one dish each to share. The chicken curry is my order, but it’s actually a dish that John spotted on a neighbouring table.  When the order arrives, it’s all drumsticks, maybe because it’s street food and you’re meant to pick it up with your hands?  The dish has a lovely colour, but probably not enough spicy punch for me.  Chicken is typically well cooked and tender. John orders the marmite pork just because it sounded interesting.  That interest fades when the dish arrives, dark brown and dry bony bits of pork with a hint of marmite, while I could taste the marmite, this was a matter of debate at our table.  I reckon Lauren and Kat’s taste buds were compromised by the alcohol, Angie admits “I’m floating”. I’m perfectly satisfied with the stir-fried fish, Lauren says it’s “crunchy” and gives it a thumbs up (see video) but I sense the rest of the group is ambivalent (or possibly just too drunk).  It is nice and crispy on the outside and white and soft inside, flavoured nicely with the vegetables and sambal sauce. Clay pot duck Hokkien noodles is also perfectly decent.  Everything was a tad over-cooked, but I think that’s the style.  No one was raving about it, much.

I was a little taken back by the tofu and mince pork sizzling surprise, when was the last time you had a sizzling dish?!  So surprised in fact that I didn’t even take a photo of it. Luckily it’s in the featured video.  The tofu and mince was in a very tasty sauce and in fact everything worked pretty well together.  This, was probably our favourite dish of the night.

The meal came to less than $20 per head; for that price, Petaling Street is perfectly acceptable.  Just don’t come expecting more.