How to cook like Heston (Blumenthal), SBS One, Thursday 29 March, 8pm 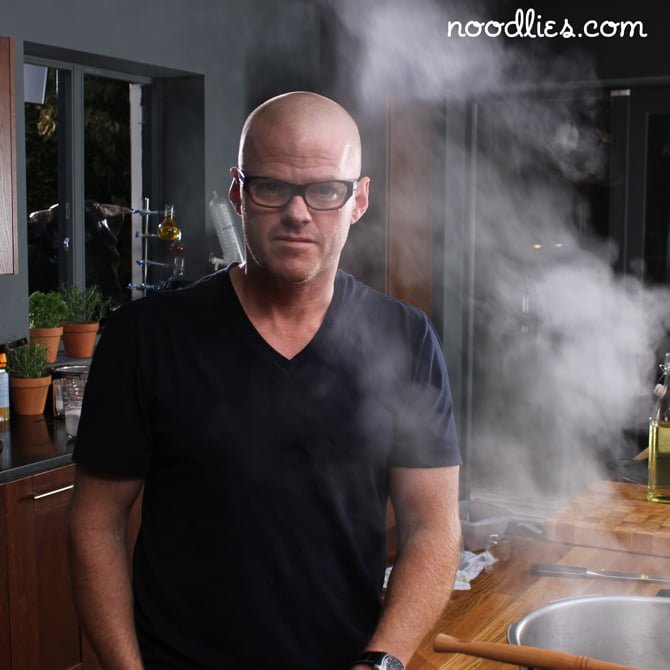 Heston, he of the edible house, soda stream champagne and lots, lots more.  Heston’s world is a theatre of full of drama, spectacle and fantasy.  How to cook like Heston is a very different kettle of fish, it’s not a ‘how to’ for some of his ambitious, culinary wonders.  This new six part SBS series is much more grounded; each episode, Heston takes one key ingredient commonly used at home and gives us easy tips on how to get the best out of it.  These ingredients are very, very close to home: beef, chocolate, eggs, chicken, cheese and the humble potato.

In keeping with the realism of this series, the usual dining theatre complete with celebs of previous Feasts are replaced with relatively ordinary people.  In the first episode, a tribute to hearty beef, they are a group of very blokely rugby players with beers in hand.  There’s a mildly amusing detour of Italian and Thai inspired burgers before Heston gets down to show us how to make that prefect beef patty.  The secret ingredient, which lurks in every kitchen cupboard, will surprise you.

Readers of noodlies, Sydney food and travel blog will know, I rarely cook.  Now and again I might dabble in a quick steak because, frankly, it’s child’s play.  Even here, Heston’s tips are really practical, from how to pick the right cut, his unconventional “flipping” technique, and most importantly of all, how to cook a steak that’s crispy on the outside and juicy and tender inside.

His flavour-injected oxtail pudding and bonfire flaming chilli con carne are closer to the spectacle we’re used to, but still very achievable, even by noodlies.

Disclosure: noodlies Sydney food and travel blog is an after hours indulgence.  During the day, I work at SBS though not in a food related area.