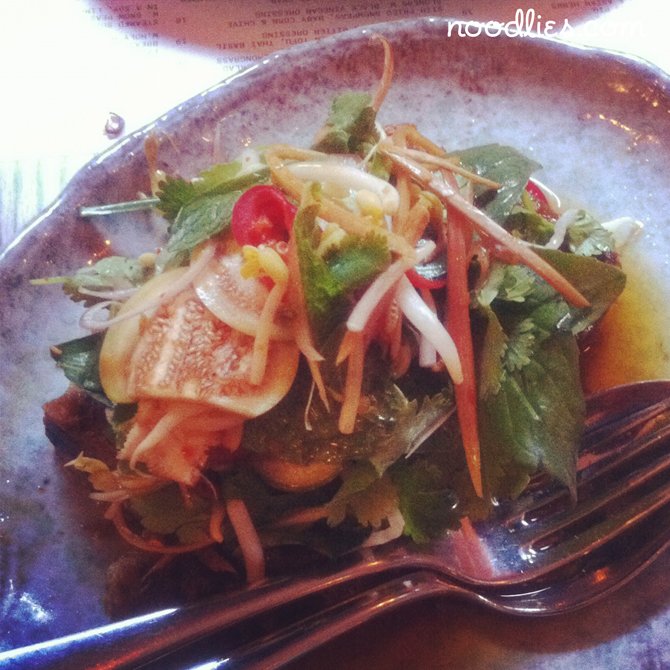 When Faye said “let’s go to Chin Chin” I thought she was having a dig at my sometimes politcally incorrect vocab.

But it’s a actual place.  Then I feared it was a retro, tossy concept restaurant, where looks count more than the food.  I pictured red lacquered walls, slender and tall cheongsam wearing waitresses with pale complexion and crimson painted lips, hair that were hehttp://www.noodlies.com/wp-admin/post.php?post=3110&action=editld in place by chopsticks.  You get the idea – my idea of hell, really.

Chin Chin couldn’t have been further from that, a skip from Yu-U in Flinders Lane, it’s a huge expanse, tall ceilings with wide a frontage that extended deep inside.  Faye insisted we dine at a Florida time of 5.30pm and when I arrived, I could see why – the place was half full and soon a queue had formed.  When packed, Chin Chin can be noisy, but rather than being distracting this adds to the buzzy, fun vibe.  Our waitress was charming and helpful, despite the number of diners, we had her full attention, our wine glass was always topped up, dishes arrived promptly, announced and served with a smile.  Chin Chin is slick and classy.

The food is ‘pan-Asian’, the closest comparison I could muster was Sydney’s Longrain.  Where Longrain has a recognisable Thai pedigree, Chin Chin’s genius that they deliver authentic Asian flavours – but you just can’t quite place where. The chilli salt chicken wings (see featured video) was a good example, fried chicken in a tantalising salt and pepper lemon sauce that could be Viet, Thai or Laos. Similarly, the shredded chicken and spanner crab salad said “Asian”: zesty, clean from coriander, mint and lime and chilli dressing. The mini eggplant was a delicious treat, absorbing all the wonderful flavours. Vanessa recommended son in law eggs with chilli jam Vanessa on twitter and I had to have it.  The egg had a light crispy shell – extra zing came from the chilli, (jam and fresh) and a final burst of freshness from the mint.

Caramelised sticky pork (see featured video) was a melt in the mouth experience, again this is the sort of dish you might come across in Vietnam, China, Malaysia – here the twist was it’s mixed in with a sour herb salad in a light chilli vinegar dressing. We rounded out the evening by sharing a black sticky rice with fresh mango and coconut cream.  Sometimes the rice can be over-cooked, here it’s still alive and kicking delivering a crunchy texture.  The mango was fresh and zesty adding more life to this dish.

No wonder it’s one of the most talked about restaurants in Melbourne, Chin Chin confidently delivered a refreshing pan-Asian menu in a fun, buzzy and friendly environment.