We were in Newtown doing a few things on a warm, sunny, spring Sydney day.  Years ago when we were living there, Bank’s Thai was a regular haunt, we wanted to see what’s changed.

For start the place seems to have changed hands, the impractical, but cute cushion seating arrangement at the front is gone; it’s all chairs and tables now.  Overall, it seems to have lost some of the over-the-top Thai element, now it’s much like the other local Thai eateries. Walter had pad thai, which looked fresh but a little more yellow than I’m used to.  He claims it wasn’t bad, but would have liked a tad more fish sauce. 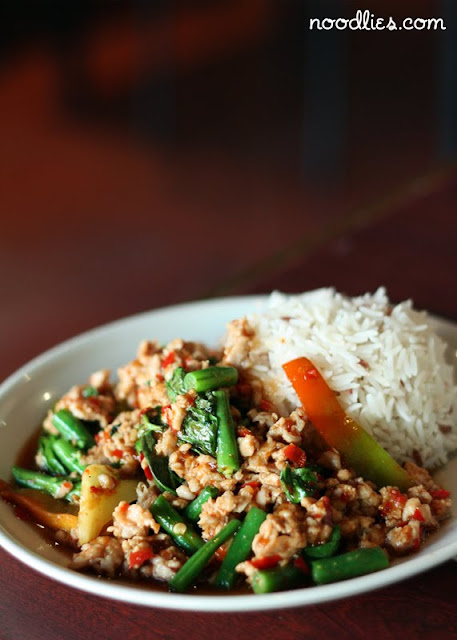 Absolutely no complaints from we with the minced chicken pad kha prow, perfectly cooked; the beans crisp and juicy, basil not raw but not overcooked, chicken mince nicely done too.  Maybe a bit too much sauce, but it had a full flavour that wasn’t over powering.

The rice that came with my dish is a version of wild rice which is less gluggy than white rice.  Not sure for Thais, but in Vietnam, while it’s shunned by city slickers, this type of rice is often served in the rice growing country areas. This Sydney food blog really does like the wild rice!